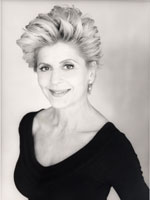 Concetta Tomei landed her big break in the early 1980s, appearing opposite David Bowie in Bernard Pomerance’s Broadway play The Elephant Man. This month, the 63-year-old actress stars as the strong-willed matriarch of Tony Glazer’s In the Daylight, a darkly comic tale about a well-known writer who returns to the family he has been avoiding for many years. The play, which opened on September 20 at the McGinn Cazale Theatre, is being presented by Choice Theatricals and Vital Theatre Company.

Although Tomei is known for her countless TV roles, including her turn as Lynda Hansen in “Providence,” she is quick to remind her fans that she is a stage actress first.

Show Business: You live in Los Angeles now, but do you still consider yourself a New York actor?

SB: What prompted your move to the West Coast?

CT: I initially moved to Los Angeles to do a play at the Mark Taper Forum, and I had no intentions of staying there to do TV. Then, I did some pilots. The first one was “China Beach.” I’ve done over 50 guest-starring roles, and I’ve done about seven television series, but I could never have done that without a background in theater, that on-the job training. On-the-job training is on a stage, not on a television set.

SB: So it all starts with theater training?

CT: In order to get your chops in anything, you have to have the training, and TV doesn’t train you. Film doesn’t train you. Theater trains you. Theater teaches you to do everything that comes after in the arts. All of your truly great actors did their ‘boot camp’ in theater. I don’t know any exceptions — Pacino, De Niro, they all worked in New York theater.

SB: I guess it’s safe to say your heart belongs to the stage.

CT: I am a stage actress. That’s why I was a bit upset when last week there was a blurb in The New York Post about In the Daylight, and they said ‘TV actress Conetta Tomei.’ I was so pissed. I said, my god, don’t they count the 20 years that I’ve been in theater?

SB: I read that in your early days you worked with Joseph Papp.

CT: I did four shows for Mr. Papp, including Richard III with Kevin Kline. I played his Queen Elizabeth. You know, I never had the guts to call him Joe.

SB: How was working with him from an actor’s perspective?

CT: It was an unbelievable experience. You know, there are many stories about the man, and when it comes to legends there are always truths and untruths. But I knew him to be a generous, generous man. He loved his actors, and I found him a formidable power, working with him. Mr. Papp was the Giuliani of theater. He made such a tremendous difference. Look at free theater in the park.

SB: Tell me a little about In the Daylight?

CT: It’s just so much fun. I flew 3,000 miles to see this play because I wanted to be a part of it. Tony Glazer is a wonderful playwright, and I’m surrounded by so much creativity and magic. John Gould is an actor’s director, because, one, he likes actors, two, he knows how to communicate with actors, and three, he’s a kind man. He’s not into his own ego and screaming and whatever. I was born with a lot of enthusiasm for life and for people, and he knows how to pull all that energy in.

SB: What are your thoughts on the health of the theater industry as a whole?

CT: I think it’s gone into so many different directions, you know, but New York raises the bar. No matter how many recessions we face, there are still lines outside of theaters. New Yorkers need that fix. That’s why I think theater here is still a healthy community, because New Yorkers, and those who visit New York, worship that. It becomes their church.