Here are a few of my media appearances and interviews.

NHPR: I spoke with New Hampshire Public Radio to talk about the opioid crisis and how chronic pain patients are feeling stigmatized and abandoned as states crack down on prescription pain medications. Listen.

HuffPost Live: I appeared as a panelist on “Political Junkies,” where I discussed the media’s coverage of the Ferguson protests and the beheading of the journalist James Foley. Watch. 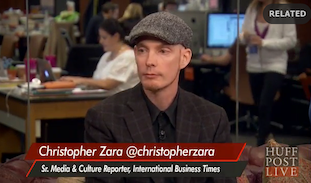 BBC Radio: On “Up All Night” with Rhod Sharp, I discussed the controversy surrounding websites like OkCupid and Facebook. (Segment begins at 2:25:45.) Listen.

CCTV America: Appearing on “The Heat,” I discussed the media’s obsessive coverage of the missing Malaysia Airlines Flight #370. Watch.