Some of my favorite media stories…

I teamed up with our politics writer David Sirota for this scoop about how New Jersey Gov. Chris Christie procured a free Corvette for a radio host who interviewed him every week. The host was one of the only members of the local press with direct access to the governor. Full Article.

Why Shock Jocks Are Obsolete

Fans of the “Opie & Anthony” radio program vowed to boycott SiriusXM in 2014 after the satellite radio company swiftly fired co-host Anthony Cumia over racially charged tweets. That the boycott had little effect was proof that so-called shock jocks, who once wielded enormous power over the stations that aired them, no longer hold the same sway. Full Article. 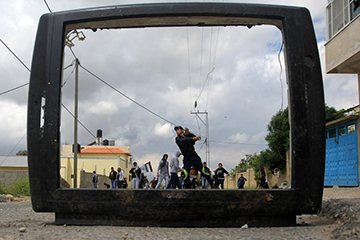 At NYC Television Week, analysts and media executives criticized Nielsen for what they say is a failure to keep up with audience measurement trends in the age of on-demand digital media. Nielsen claims it can measure cross-platform viewing fine, but the current rules prohibit it from doing so. Full Article.

Media companies like the Walt Disney Company, 21st Century Fox and Time Warner are betting heavily that the superhero movie genre will be popular with audiences through the end of the decade. But genres go stale. Just look at Westerns. Full Article.

CNN habitually preempted its popular mini-series “The Eighties” in lieu of breaking news, highlighting a tricky line it has been trying to toe as it has invested more heavily in non-news programming. Thanks to my report, the Wiki page for this show has a “controversy” section. That’s impact, baby. Full Article.

When TV Watches You Back

I spoke with privacy advocates and legal experts about a new plan by NBCUniversal to combine consumer data with information from cable set-top boxes in hopes of learning more about which types of viewers watch specific shows. Full Article.